When I grow up, I want to be… David Walliams 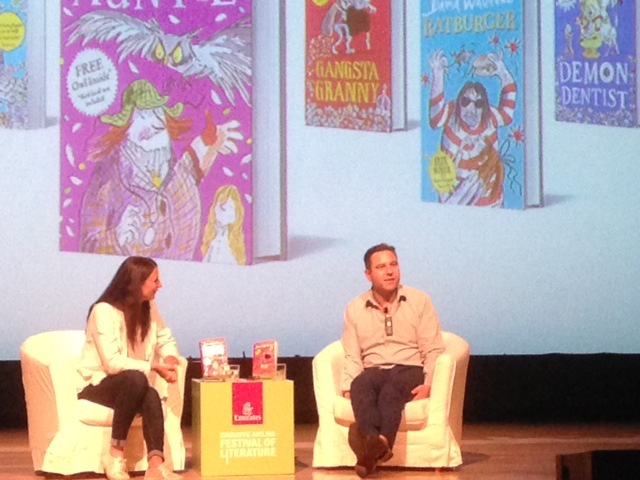 The Emirates Airline Festival of Literature 2015 (from now on to be called EAFOL15) kicked off today with a session by David Walliams, who was at the festival to talk about his children’s books.

Fortunately I have children who like his books so I was able to attend under the guise of “having” to drive them there but, if the truth be known, I was pretty keen to attend myself. Not only am I a big fan of Walliams, but this was my first chance to crib up a little on how to pull off an author session for when it’s my turn next week – and who better to learn from than a man who’s author, actor, comedian and master of self-deprecating humour?

So I sat there making notes while Walliams talked.

“Be humble,” I wrote, as he quieted a standing ovation with the words, “Lower your expectations.”

“Make jokes,” I scribbled as he admitted with a sigh that the best book he’s ever written was called Harry Potter & the Philosopher’s Stone (“Some woman’s running around claiming she wrote it,” he said sotto voce. “Big legal battle.”)

Sadly, though, I suspect humour of that scale is something I won’t be able to get away with until and unless I’m filling 900-seater auditoriums. At the moment, I’ll just be grateful to see bums on seats and have people come to say hello but, as the title says: when I grow up, I wouldn’t half mind being David Walliams.