My week as a writer-in-residence: Dubai Central Prison

In November 2019, author Clare Mackintosh and I spent a week inside Dubai Central Prison, delivering a writing workshop to inmates. The goal? To enable the prisoners each to produce a 2,000-word story or essay that could be published as part of an anthology.

It was a ground-breaking project and one I was very proud to be a part of. Thanks to the openness of Dubai Police, it was the first time that two authors had been allowed to remain as unsupervised ‘writers-in-residence’ inside Dubai Prison in order to deliver such an intense workshop. Clare was to teach in the Men’s Prison, while I was to be in the Women’s.

I’d be lying if I said I wasn’t a little nervous. Not only were the stakes high in terms of the trust shown to us by the authorities, but I had so many questions on my first morning, over and above what conditions would be like inside the jail: had Clare and I pitched the teaching at the right level? Would the students be keen? And, more importantly, would they be dedicated enough to put in the hard work that we needed them to over an intense week? Each piece would have to be written by hand without the ‘copy/paste’ convenience of a computer. Any editing and rewriting would involve a huge amount of physical work.

I needn’t have worried. On the first morning, I was shown to a classroom, next door to the prison library, where 15 women from almost as many countries sat waiting and ready to learn, and I set about getting to know them: what made them tick, why they wanted to write, who they were writing for.

By the time the gate clanged shut behind me for the last time, I’d witnessed patience, resourcefulness and resilience in ways that were new to me. I’d also made 15 new friends with whom I’d shared jokes, banter, life stories and doughnuts, and each of these women had also produced a unique piece of work, which is now part of the anthology ‘Tomorrow, I Will Fly’.

The book was published by the Emirates Literature Foundation and will be shared with prisoners throughout the region and ultimately released online as a free download.

In February, Clare and I went back to launch it inside prison to an audience of officials, inmates and select guests, who were treated to readings by the prisoners.

Here are a few links to media articles about the project:

The National – Tales  from inside Dubai’s prisons 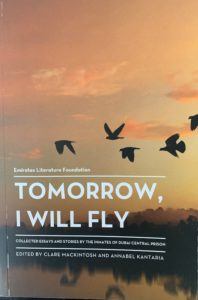