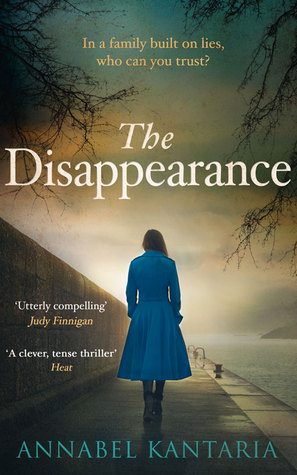 Widow Audrey Templeton wants nothing more than to spend her 70th birthday with her children on a once-in-a-lifetime cruise. Busy with their own lives, John and Lexi aren’t overjoyed at the thought, but they agree to go.

Celebrating her birthday at the ship’s White Night party, Audrey tells them that when she dies, they will each inherit a life-changing amount of money. With both children struggling financially, the news couldn’t be more welcome. The next morning, there’s no trace of Audrey. The search moves from the ship to the shifting waters of the Mediterranean, but it’s as if she simply disappeared.

As John and Lexi investigate their mother’s disappearance, clues emerge about her early life – time spent in India, scandal and tragedy – a past she kept secret from them. As they question if they really knew Audrey at all, they also start to wonder if they can trust one another.

The idea for this story came to me after I’d been on a cruise myself – as I sat on deck each day, I realised that a cruise ship is a great place to set a story: for a start, there’s no escape. But I was also fascinated by the fact that so many people really do disappear while on cruises. In the 11 years from 2006 to 2017, 296 people have gone missing from cruise ships – that’s nearly one person every two weeks!

So what causes people to disappear into thin air when on a cruise? Accidents, arguments, suicides, foul play… and, sadly, many of these cases go unsolved.

Interesting fact: the majority of those who fall overboard by accident do so on the last day of their holiday.